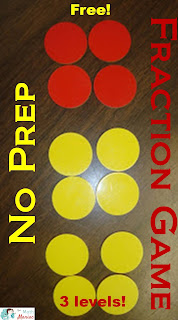 This morning I was working with some fifth graders who needed some intervention in the area of fractions.  The Common Core has a great deal of expectations for fifth graders around conceptual understanding of fractions and fraction operations.  I grabbed my 2 sided counters

to create a quick game for these intervention students.  After about 20 minutes, I had the intervention students join the other students and we invented level 2 and level 3 of the same game to work on fraction operations.  I love low prep games that get kids working on important concepts without requiring the teacher to spend hours prepping materials.  Kids make their own record sheets!!  You can get your whole class started on level 1 and then introduce levels 2 and 3 as pairs need.  Or pick just one level if your kids are in a specific place!

- Each person needs a piece of scrap paper or a small whiteboard and a pencil or marker
- Each game has 5 rounds. If pairs/groups finish one game and were fluent, move them onto the next level, otherwise have them play another game at their current level.

The kids who needed more work really needed some more conceptual development around equivalent fractions.   Here is a look at a record sheet from round 1 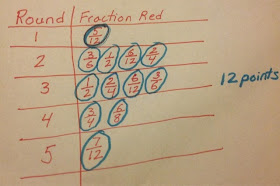 Shake the counters in a small cup and drop them.   Sort into red and yellow. Record as many equivalent fractions that you can find  using the counters.  We made the rule that you couldn't split the counters into pieces therefore the largest denominator possible was 12.  When both partners are done round 1, switch record sheets.  Check your partner's fractions.  If you agree with them, circle them.  One point is scored for each correct fraction.  The winner is the person with the most points at the end.

I love level 1 for 4th graders and intervention/early 5th graders because it can be very hands on and there is a great deal of visual support.  Take a look

The fifth graders are also working on adding fractions.  For level 2 I had them each take 5 turns and record one fraction each time.  Then they had to find the sum of the 5 fractions they rolled.  This was great because even though the recorded some in twelfths, some in thirds, some in halves, etc, they had just practiced finding equivalent fractions and were able to quickly convert between equivalent fractions in order to find the sum of 5 different fractions.  Take a look at a record sheet from level 2 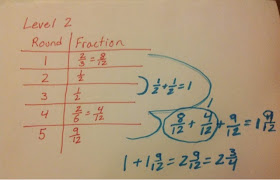 I loved that they were finding the sum of 5 different fractions and that the sum often went over 1 and sometimes even over 2.  It was a great way to practice (with hands on materials as a back-up) a lot of the skills that fifth graders are required to have.  Each student played several games on level 2.

This level was for my advanced students and some students who had been exposed further to fraction operations.  They had to shake and drop the 12 counters and figure out what fraction of the counters were red.  Then then had to come up with equations that equaled that number.  In round 1, they had 1 equation, round 2 required 2 different equations all the way up to round 5 which had 5 different equations.  I LOVED this version because they had the answer and had to come up with the problem.  Depending on their comfort level, the equations varied quite a bit in complexity and uniqueness.  Here is a peak at 2 different record sheets from this level.

I love activities like this!  No prep required, minimal materials and completely differentiated to meet kids below, on and above grade level.  The best part is that the kids really think everyone is playing the same game.  Because the materials are the same and some of the rules, they don't see how much they vary in difficulty.  This series of games will become a math center during Guided Math time later in the week!

How do you differentiate learning for your kids?

If you want to see how I use these same counters with K-2 kids, check out this post or this one