I have been working hard with my first AND second graders on fractions over the last week.  Here is a look at the Common Core standards for grades 1 and 2 around fractions

CCSS.Math.Content.1.G.A.3 Partition circles and rectangles into two and four equal shares, describe the shares using the words halves, fourths, and quarters, and use the phrases half of, fourth of, and quarter of. Describe the whole as two of, or four of the shares. Understand for these examples that decomposing into more equal shares creates smaller shares.

CCSS.Math.Content.2.G.A.3 Partition circles and rectangles into two, three, or four equal shares, describe the shares using the words halves, thirds, half of, a third of, etc., and describe the whole as two halves, three thirds, four fourths. Recognize that equal shares of identical wholes need not have the same shape.

Yup.  The fraction standard is found in the geometry section and it is all about partitioning into equal sized pieces.  It also gets to the HUGE idea that the pieces do not have to be congruent to be equal.  Notice what is not there?  There is nothing about using symbolic notation.  Awesome!  I have found that using the numerals 1/2, 1/2, 2/3, etc do nothing to promote understanding of fractions and actually hurt kids when they learn them to early.  Seeing the numerals for 1/2 and 1/4 at an early stage lead a lot of kids to reason that 1/4 is larger than 1/2 because 4 is bigger than 2.  This is called improper whole number reasoning and our instruction can really reinforce it if we are not careful.

Because of the move to the Common Core standards, I was not happy with the materials we had been using around fractions, so I decided to create some of my own.  I really wanted kids to use the language and words of fractions and stay away from the symbolic notation.   After creating things and tweaking the way I used them, I couldn't be happier with the results!  Both the first and second graders did a great job on the assessment and they have this amazing conceptual understanding of fractions.

Here are some highlights from our week of fractions!

Have you played scoot games with your students?  They are so much fun and a very engaging way for kids to practice all kinds of skills.  For this game, I spent some time making a set of 18 cards where some show fourths and others show things that sometimes kids think are fourths.  We looked at a few of these pictures as a class and really talked about how we knew something was fourths.  Then the kids headed out to play scoot using these cards.  They rotate around the room with their record sheets and fill in fourths or not fourths (some used the word fib instead) When they finish, I pair them up with another person who is done and they have a "math talk."  This is where they compare answers and anywhere where they disagree, they go back to that card and try to come to a consensus.  This brings up some great conversations and is a place where a lot of math learning can take place.

When most kids had finished their math talk, I brought them back to the discussion circle and we further discussed two cards that caused a lot of discussion among pairs.

Talking about these two cards and having kids construct arguments to support their thinking really got at the big idea behind fractions.

I ended the class period with a quick formative assessment sheet on fourths.  This let me see who got the big ideas and who needed a little more help.  There were a few kids who didn't seem to have it and I met with them for about 15 minutes in a small group at the beginning of class the next day.

I really love the question on the bottom of the page that says "How do you know you are right?"  This really lets me see what their ideas are around fractions.  Check out some of these responses


Here is another one 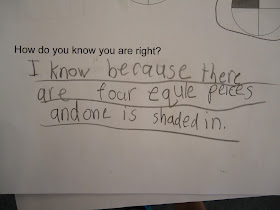 With the second graders (and a few first graders who were ready for the challenge), I made up another set of cards almost exactly like the the last set.  These have thirds or not thirds.  We played scoot and used them for warm ups and such.  We used a similar record sheet and process.  Here were the 2 cards that were brought to the rug for our final discussion at the end of the game.  Notice how the pieces are eight oriented differently or not congruent.  Many kids still had disequilibrium around these 2 cards.  We again had a great discussion and had kids had to construct arguments and try to prove their thinking to their classmates.

We also followed up this scoot game with some formative assessment.

We finished off the week with a quick assessment to see how students have progressed in their fraction understanding.  I made up 2 different assessments.  One was for grade 1 and the other for grade 2.  The kids did fairly well and we will continue to use some of the other worksheets I made up for extra independent practice or homework.  We put the cards from the fourths or not fourths game into a math center for extra practice during partner work time as well.

The materials I made for this unit turned out great!  I have posted the entire unit including games, worksheets, answer keys and assessments on Tpt.  Click here to check it out!

I posted Fourths or Not Fourths as a freebie on Tpt.  Click here to check it out!


How do you teach fractions to first or second graders?